Positive Sri Lanka – We will do it again… together. 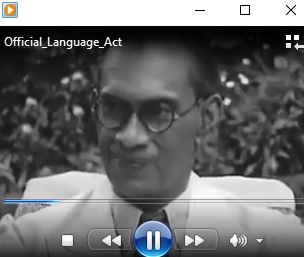 An introduction of the Official Language Act, 1956 was not intended to discriminate Tamils. (Video clip from 1956 archives)
The Official Language Act No. 33 of 1956,  was an act passed in the Parliament of Ceylon in 1956. The act replaced English as the official language of Ceylon with Sinhala. Due to the lack of official recognition to Tamil, the Tamil Language (Special Provisions) Act, 1958 was passed and in 1987 the Thirteenth amendment to the Constitution stated that, “the official language of Sri Lanka is Sinhala” while “Tamil shall also be an official language,” with English as a “link language.”

Sri Lankan Tamils also are known as Ceylon Tamils or simply Tamils, are members of the Tamil ethnic group native to the South Asian island state of Sri Lanka. According to the anthropological and archaeological evidence, Sri Lankan Tamils have a very long history in Sri Lanka and have lived on the island since at least around the 2nd century BCE. Today, they constitute a majority in the Northern Province, live in significant numbers in the Eastern Province and are in the minority throughout the rest of the country. 70% of Sri Lankan Tamils in Sri Lanka live in the Northern and Eastern provinces.

Although Sri Lankan Tamils are culturally and linguistically distinct, genetic studies indicate that they are closely related to the Sinhalese ethnic group in the island. The Sri Lankan Tamils are mostly Hindus with a significant Christian population. Sri Lankan Tamil literature on topics including religion and the sciences flourished during the medieval period. Since the beginning of the Sri Lankan Civil War in the 1980s, it is distinguished by an emphasis on themes relating to the conflict. Sri Lankan Tamil dialects are noted for their archaism and retention of words not in everyday use in Tamil Nadu, India.

One-third of Sri Lankan Tamils now live outside Sri Lanka. While there was significant migration during the British colonial period, the civil war led to more than 800,000 Tamils leaving Sri Lanka, and many have left the country for destinations such as India, Australia, Europe and Canada as refugees. Few of them also support Tamil Eelam, a proposed independent state that Tamils in Sri Lanka and the some Sri Lankan Tamil diaspora aspire to create in the north and east of Sri Lanka.